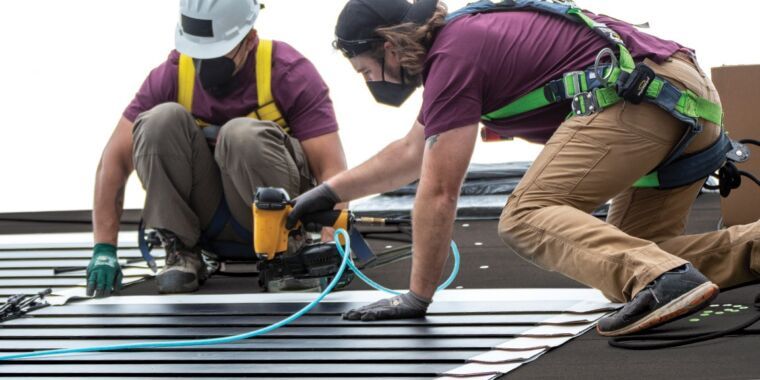 "A new solar technology introduced yesterday at CES could bring power-producing roofs mainstream by relying on an old building material—nails.

For years, homeowners who wanted solar power have stripped their old roofs of shingles, added new ones, and then slapped large solar panels on top using sturdy frames. It’s a model that works well, but it also creates a two-step process that engineers have been striving to simplify.

Plenty of companies have offered their own take on solar roofs, but so far, they’ve remained niche products. GAF Energy is hoping to change that with the Timberline Solar Energy Shingle that looks strikingly like typical asphalt shingles. But their key feature isn’t so much that they emulate the look of asphalt shingles, but that they’re installed in nearly the same way. Roofers can slap the flexible sheets down and nail the top strip to the roof, just like they do for traditional roofs.

By relying on the shingle installation process, GAF Energy is counting on the scale of the roofing industry to make solar more accessible. “The roofing ecosystem is 20–30 times larger than solar. In the United States, 200,000–300,000 people get a new solar system each year. Over 5 million get a new roof,” Martin DeBono, CEO of GAF Energy, told Ars. “Our innovation is you now have a nailable solar roof, which fits the way that the majority of roofs are installed."
…
Engineers changed the wiring layout based on the company’s experience with previous generations of solar roof. “With our current product, Decotech, the wires are underneath,” DeBono said. “It’s a bear when the inspector wants to see the wiring—you’re taking off flashing. And similarly for other built-in photovoltaic roofs if the inspector says, ‘I want to see all the connections are made,’ you’re going to be popping up the waterproof layer to show them.” With the new top-mounted system, installers just have to pop off a waterproof cover. It’s an approach that should also make troubleshooting and repairs simpler.
…
“A homeowner won’t pay any more for a GAF solar roof than they would if they were to get a new roof and have someone put solar on it. That’s our benchmark,” he said. “We’re half the cost of a Tesla solar roof in any given market right now.”
…
“What we say,” he said, “is that with this roof, mister and misses customer, you can generate enough electricity that it will not only pay for the solar system, but also pay for the roof itself. And that’s a very compelling value proposition.”
"